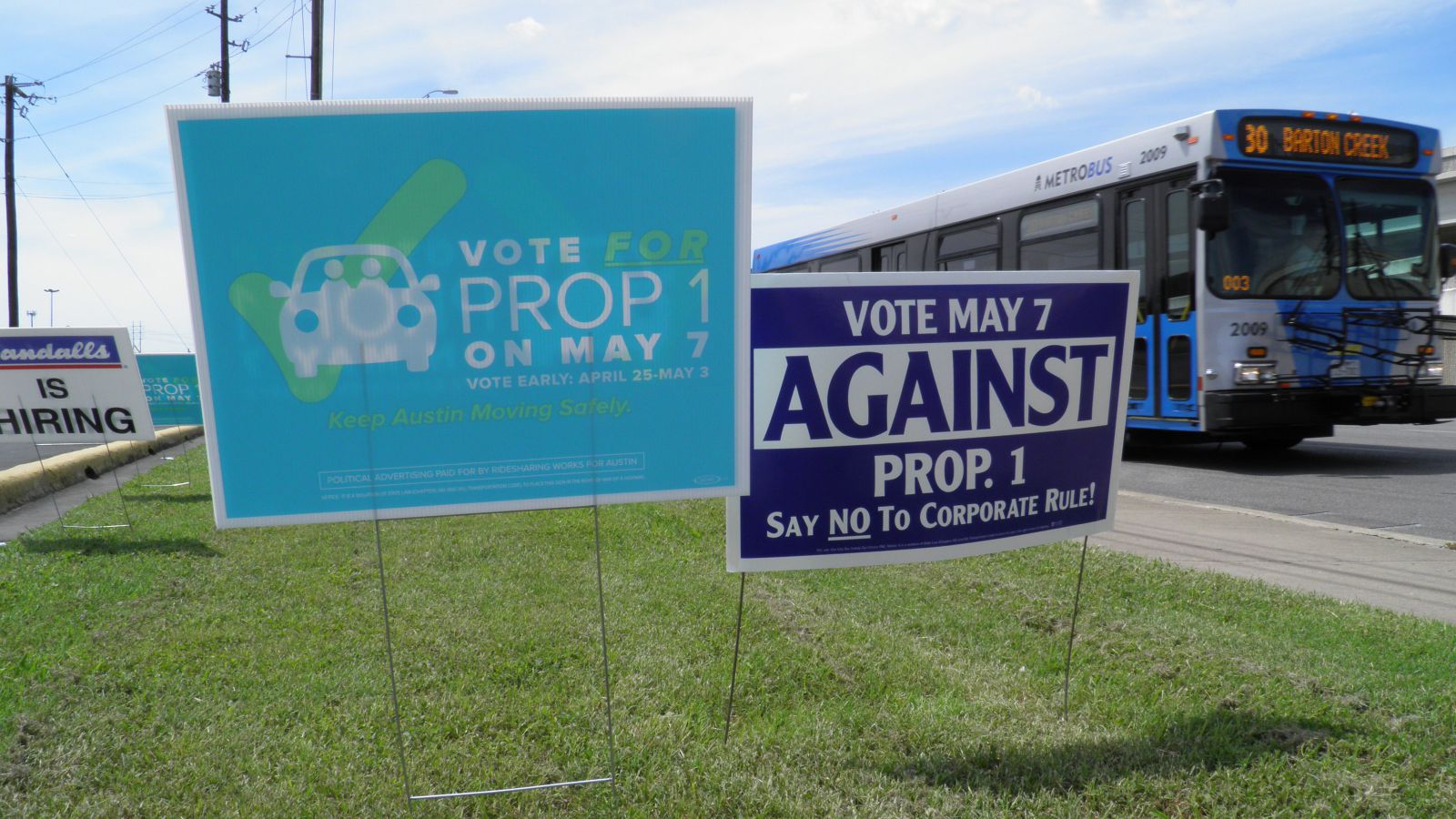 A couple days ago, Austinites voted to reject Proposition 1 with 56% against , a move that has led to Uber and Lyft stopping operations in our city. I’ve been reading many articles about Prop 1 and how this contentious issue has developed, but none of them give much information about what’s actually in Prop 1 and the ordinance that led to it. I’d like to provide some detail on the laws that were at stake, and offer my thoughts on what has happened.

The battle started in earnest when the Austin City Council passed an Ordinance Amending City Code Chapter 13-2, adding new laws and regulations on Transportation Network Companies (TNCs) such as Uber and Lyft. It’s a pretty readable document if you’d like to read it for yourself. Here are some main points from the ordinance that I think are worth going over:

This ordinance was passed in December 2015 by the city. Some parts of the ordinance were already implemented partially by Uber or Lyft, such as fare estimates, receipts, and surge pricing indicators. However, many other components, such as surge pricing prohibitions during abnormal market disruptions, prohibition from using travel lanes to load and unload, displaying an emblem, and fingerprint-based background checks were not implemented by Uber or Lyft and met their harsh response.

Uber and Lyft responded to this by creating a petition to repeal the ordinance and replace it with one written by them, which received the needed signatures and led to Proposition 1, a proposition for the following:

Shall the City Code be amended to repeal City Ordinance No. 20151217-075 relating to Transportation Network Companies; and replace with an ordinance that would repeal and prohibit required fingerprinting, repeal the requirement to identify the vehicle with a distinctive emblem, repeal the prohibition against loading and unloading passengers in a travel lane, and require other regulations for Transportation Netowrk Companies?

The full pdf is here. The proposition provides a version of Article 4 of Code Chapter 13-2, with the following changes being most notable:

Other components of the original city ordinance, such as fare disclosure, surge pricing restrictions, and fees of 1% of revenue were kept in. A vote was to be cast on May 7th, 2016 to decide whether to vote:

Thus began the most expensive political campaign in Austin history. Uber and Lyft created a political action committee, Ridesharing Works for Austin, in support of Proposition 1. The PAC received more than 8 million dollars solely from Uber and Lyft, and did not receive or accept any personal donations, but did encourage campaign volunteering. The PAC’s money was used for all forms of media advertising in the Austin area, including TV ads, internet ads, mailers, and local calling.

On the other side, two political action committees were formed against Prop 1: Our City, Our Safety, Our Choice and Austin Unites, which raised about $100,000 in total donations, largely from individual donations, labor unions, and first responders.

The spending by RWA was the largest in Austin history: in fact, our current mayor Steve Adler’s campaign cost only 1.2 million dollars in comparison.

Most notably, Uber and Lyft threatened to leave Austin if the proposition did not pass, and end operations in Austin for an indefinite time.

On May 7th, 2016, Austinites voted against Prop 1, with 56% against. 17% of registered voters took part in this special municipal election. After results were announced, Uber and Lyft shut down operations in Austin the next Monday.

So far, Uber is continuing operations in Austin suburbs. Both companies announced their disappointment and hope for changes in ridesharing laws. Now, the Uber app just displays a “Contact City Council” button, encouraging riders and drivers to speak out against the city ordinance and regulations on ridesharing companies.

I hope you’ve enjoyed this article and have a deeper understanding of Prop 1 and recent events. I wanted to write this to help you understand what’s actually at stake, so that you can make your own decisions as to how to proceed. If you’d like to hear my personal thoughts on the matter, read on. Please keep in mind what I think is precisely that: I’m not necessarily right, and I don’t want to force my ideas on anybody. Otherwise, thanks for reading, I hope you got something out of it!

The election results show that this issue has been contentious. As a UT student and native Austin resident, I have seen the active campaigning, both on our campus and on TV, and heard both sides loud and clear. As with any important political issue, it’s very difficult to argue that one side is completely justified while the other is totally wrong. Both sides have their own motives and intentions: my opinion is that while Uber and Lyft provide needed transportation and jobs to a very traffic-congested city, their threats to pull out of Austin were the primary motivation for voters to vote for their proposition, and their execution of this threat is being used as an example to show other local governments what happens when you try to get in the way of ride-sharing companies. Honestly, I think that with or without Prop 1, the new ordinance laws on ridesharing companies are already much better than before: I just don’t agree with the way Uber and Lyft used threats to try to get their legislation passed.

Ridesharing is easy and affordable, giving people without cars access to quick and convenient transportation. I’ve used Uber and Lyft many times to get around Austin, Seattle, and the Bay Area, and have only had good experiences (well, when there isn’t surge pricing…) Many people rely on it to get to work, go home at night, or as a part-time or full-time job. I don’t think anybody wants ridesharing to leave Austin. However, no component of the council ordinance requires Uber or Lyft to leave: they are simply using Austin as leverage.

Even with the fingerprint background checks, and restricted loading lanes, Uber and Lyft can still operate in Austin with a very healthy profit, and almost all drivers would agree to a fingerprint-based background check and to display an emblem if it means they can keep their jobs. Like any business, Uber and Lyft want to grow and maximize their businesses in the long run, and get into as many markets as possible, adjusting local regulations to benefit their businesses. They do have every right to fight for their own interests, and the interests of their owners and shareholders. The companies must have determined that executing their threat and leaving Austin was most beneficial to them, because it would set Austin as an example for others, and possibly scare other local governments and voters into doing what Uber and Lyft want, in order to keep them in town.

Prop 1 gained support not because people were against the city ordinance and the laws inside it, but because they didn’t want Uber and Lyft to leave. On UT’s campus, student volunteers chanted “Vote to keep Uber and Lyft in Austin!”, not “Vote against fingerprint-based background checks and displaying emblems on cars!” Why? It’s because it’s very difficult to argue against the laws in the city ordinance, other than because it hurts profit margins, and exchanges a bit of convenience (picking up anywhere on the side of the road) for some increased safety. While it’s certainly not illegal for Uber and Lyft to threaten leaving a city on the results of a democratic vote, in my opinion it’s unethical and uses corporate leverage to entice people to vote for something they may not wholeheartedly believe in. Think about it this way: if Uber and Lyft were to stay in Austin despite the results of the Prop 1 election, I’m certain more people would have voted against it, because without their threat of leaving, it’s much more difficult to justify repealing laws that try to make ridesharing safer.

I’m very interested in seeing what happens next for ridesharing, in Austin and in other cities. I hope that local governments and businesses can work together to help their residents have convenient, affordable, and safe transportation: however, this is a difficult task, and in many cases government and business are at odds. I hope to see Uber and Lyft come back to Austin, but I do hope that no other city has to experience what we have gone through, and vote on a fair local referendum with a giant threat looming over their shoulders.